Video of this song from youtube
Average Rating : 4.54
Total Vote(s) : 37
Please rate this song between 1 star and 5 stars (5 stars being the best). Just move your mouse on the stars above and click as per your rating. Your rating will really help us to improve our website. 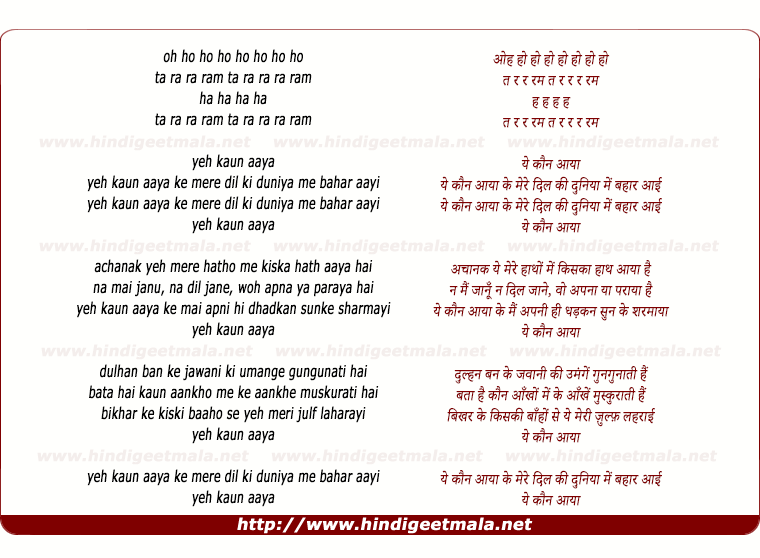 orientlover1 on Wednesday, April 04, 2012
It was very common during the 1950's and part of 1960's for any male actor to light a cigarette before a song or at the start of a dialogue. You can see several such scene in this movie also.This was a major cause that almost all renowned actors were chain smokers.
orientlover1 on Wednesday, April 04, 2012
It is possible that he was brother of Prem Dhawan, a famous song writer and also sometimes dance director.
orientlover1 on Monday, April 02, 2012
Who is the actor entering at 0:47 in uniform then sits at sofa 1:37 till end smoking. What's his name?
isaac moses on Friday, October 16, 2009
full many a flower is born to blush unseen to waste it's sweetness in the
desert air a quotation taken from english poetry aptly describes this film
song, The charm & innocence of those golden days is portrayed with
sincerity for the way the central character enacts this song of love, her
body language & expressions so purely defined, interpreting a playback
singers voice so precisely. The artistry we observe, is attributed film
makers for all songs we listen & love to this day Bharat