Video of this song from youtube
Average Rating : 4.52
Total Vote(s) : 136
Please rate this song between 1 star and 5 stars (5 stars being the best). Just move your mouse on the stars above and click as per your rating. Your rating will really help us to improve our website. 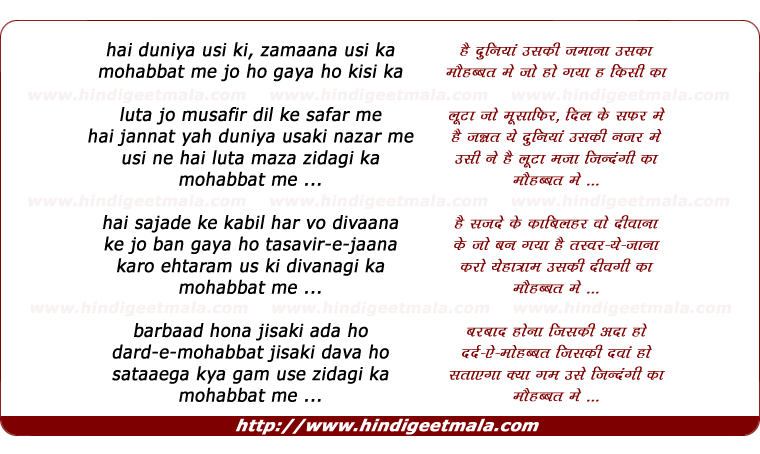 oldisbest on Saturday, October 25, 2008
well smod,thts ur personal opinion,thers were great music directors in the 80s and 90s and even now theres a couple of realy good music directors but there has never even been any1 close to Rafi sab n thts not my personal opinion, its the opinion of those who know wht they're doing, ie profesionals of the music industry. Wen Rafi saab was at his peak, there were other singers ie mukesh etc but time and time again, film producers,music directors only wanted Rafi saab,n tht my freind says it all!!
Dilip S. Coulagi on Saturday, October 25, 2008
Rafi's singing is the tops, but you have to acknowledge the contribution of
the instrument players - one of the reasons for the quality of OPN's music
was that his instrumentalists were the best in the country, who later
became famous musicians in their own rights: Pt. Ramnarayan on Sarangi,
Ustad Rais Khan on Sitar, Pt. Shivkumar Sharma on Santoor and many others.
The diamond of Rafi's voice certainly is the sweetest in this setting...


ahmedhemani88 on Monday, October 04, 2010
The lyrics are by Shamshul Huda Behari. S H Behari and O P Nayyar and Rafi have weaved many such magical musical experiences. Kismat songs come to mind if you want toï»¿ enjoy more such songs. The expressions of Rafi saheb matches so well with the mood and location of song. Wonder how difficult it must have been for Rafi saheb to mimic expressions of a situation he has never been - drunk in a bar. Simply outstanding.
radonpq99 on Wednesday, June 09, 2010
Its not just the enchanting quality of Rafi's voice and great acting by
Shammi the whole song is like no other. The muted ambience of a closing bar
and the brilliant saxaphonist add to the allure of this magical song. I
hope today's film maker who would cram a thousand visual images of few
seconds duration in 3 minute song would learn a few things from such
picturisations.