Video of this song from youtube
Average Rating : 4.31
Total Vote(s) : 64
Please rate this song between 1 star and 5 stars (5 stars being the best). Just move your mouse on the stars above and click as per your rating. Your rating will really help us to improve our website. 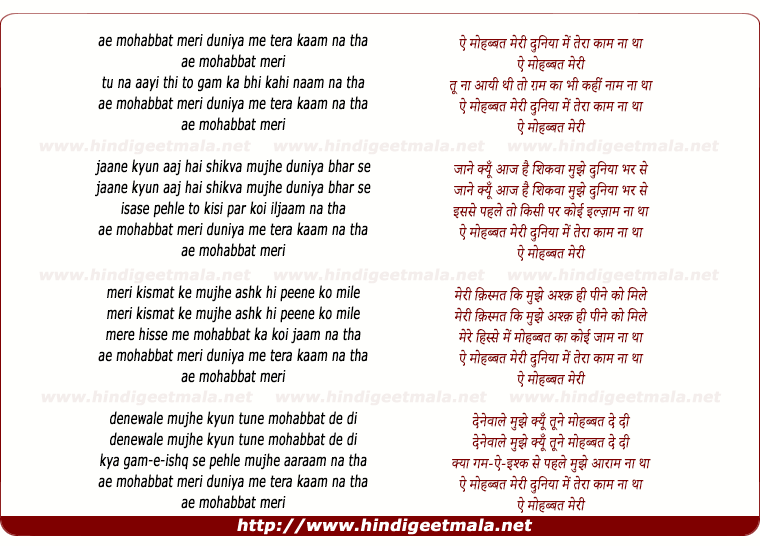 Comments on song "Ae Mohabbat Meri Duniya Mein"
orientlover1 on Wednesday, September 21, 2011
I think he was at least 12-14 years older than 53. He appears in 1950 film Aaram as a fully grown young man in mid twenties or more. By that estimation his date of birth was either 1925 or 1923.
RealMusicKing on Saturday, December 25, 2010
Sir, Hello. A very under-rated and rare song. Not many know about this song even today. Thank you for posting.
orientlover1 on Saturday, June 18, 2011
What happened to Manmohan Krishin? Is he still alive?
Amarjit Madan on Sunday, May 03, 2015
BEES SAAL BAAD but I am enjoying this song 53 years baad. .This song was
popular then and now ..I was in BOMBAY then now at New York.A good
creation does not loose its charm years together unlike now the so called
music withers away in hours.Music lovers like you have stored some treasure
of Bhule Bisre Geet to keep the true music ALIVE and people like me would
be always thankful.﻿

V. Siddhartha on Sunday, February 01, 2009
Glad to see the veteran character actor Manmohan Krishan in the clip. He
was known to my uncle from their Lahore days. One day back in 1973 the
three of us and my wife had tea at the then-open air cafe of the Cottage
Industries Emporium on Janpath, New Delhi. A totally unassuming and amiable
man, he made us feel like he was just a regular guy. I love such memories.