Video of this song from youtube
Average Rating : 4.50
Total Vote(s) : 10
Please rate this song between 1 star and 5 stars (5 stars being the best). Just move your mouse on the stars above and click as per your rating. Your rating will really help us to improve our website. 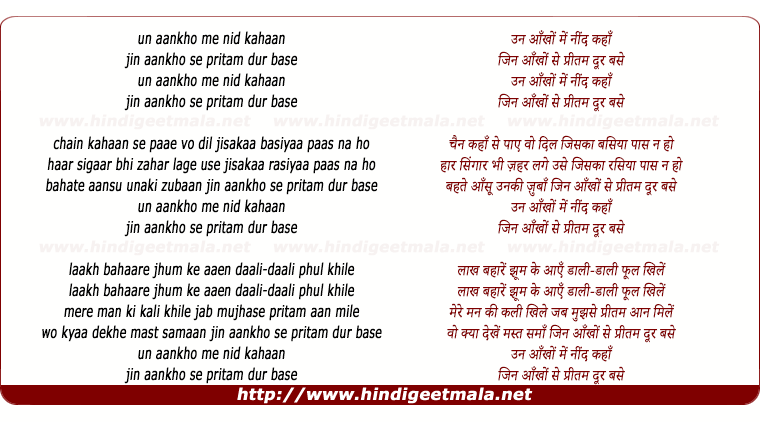 Comments on song "Un Aankhon Men Nind Kahaan"
rajanmathew100 on Tuesday, March 22, 2011
This evergreen song has the typical stamp of Madan-Lata . The lyrics also contribute to the beauty of the composition. Madan Mohan may not be with us, but he will live forever through his songs
Rajan Thomas

V. Siddhartha on Friday, March 20, 2009
You , Shalini Razdan, Ilyas Mirza , and Dr. Hassan Bukhari have carved out
a special place in my world because of the way you sniff out rare and
hidden gems. This is the first example that I have seen of a master
demonstrating his composition to a virtuoso "disciple" and the disciple
then spinning such a creative interpretation on the "lesson" that the
master probably saw his jaw drop in wonderment. I suspect MM always had
that fulfillment with Lataji. Thanks again,bemused 321.

Coucoutchicou on Thursday, May 05, 2011
There are fabulous songs placed in movies that never managed to make it and
very few people saw. This is one such song from one such movie... What a
rare pleasure to be able to hear the song and see it on-screen! Many, many
thanks for this upload.

jasbongy on Wednesday, July 14, 2010
Very beautiful song and PERFECT for dedicating to Madan Mohan ji. by you.
Let his soul rest in peace. Since i have not seen the film,i enjoyed
watching this clip. Thanks dipiaar ji. Thumbs Up. With respect. Sarla.