Video of this song from youtube
Average Rating : 4.30
Total Vote(s) : 43
Please rate this song between 1 star and 5 stars (5 stars being the best). Just move your mouse on the stars above and click as per your rating. Your rating will really help us to improve our website. 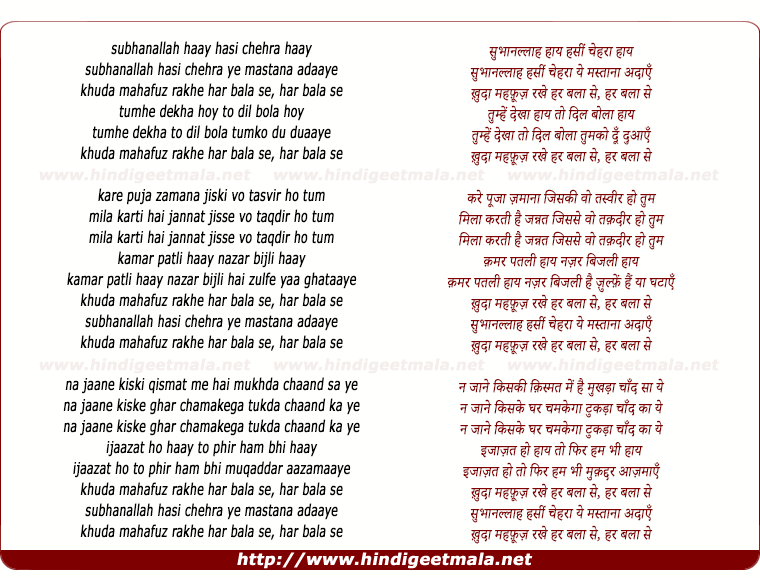 Comments on song "Subhaanallaah Hasin Cheharaa Ye Mastaanaa Adaaen"
beon1904 on Thursday, October 23, 2008
My goodness! What on EARTH did you guys DO to the darned video? Folks, if
you're claiming copyright to the videos, then either please DON'T put the
video up at all (stills, maybe?) or put it up in a quality that we can at
least SEE what's going on!

1955shashi on Wednesday, May 26, 2010
Shammi's antics are matched only by Rafi's rendering of this zestful number. OP Nayyar score is this film was an all time hit and is enjoyable even today. Thanks for uploading this rare clip. Subhanallaahh !!
neogmx on Monday, December 22, 2008
Audio Rating: 5
Video Rating: -5
Looks like this is the only video of this song on youtube...Can anybody post a better link/video...!

silgry on Friday, April 10, 2009
Greatest Rafi saab,brilliant in all form of song,simplybest,the voice of GOd
Ashar Hafeez on Monday, May 10, 2010
thanks for upload. I was looking for this song for so long since i first
heard it on radio 20 years ago. I dont know why we cant find Rafi sahib's
songs in music centers. every music center has the same few hundrad songs.
I wish Waheed Murad has acted for raf sahib. This Shemale type actor just
detroys songs. he looks 50+ age and tries to act like teen ager. i think
there were so many othr good actors at that time, why this monkey?