Video of this song from youtube
Average Rating : 4.63
Total Vote(s) : 16
Please rate this song between 1 star and 5 stars (5 stars being the best). Just move your mouse on the stars above and click as per your rating. Your rating will really help us to improve our website. 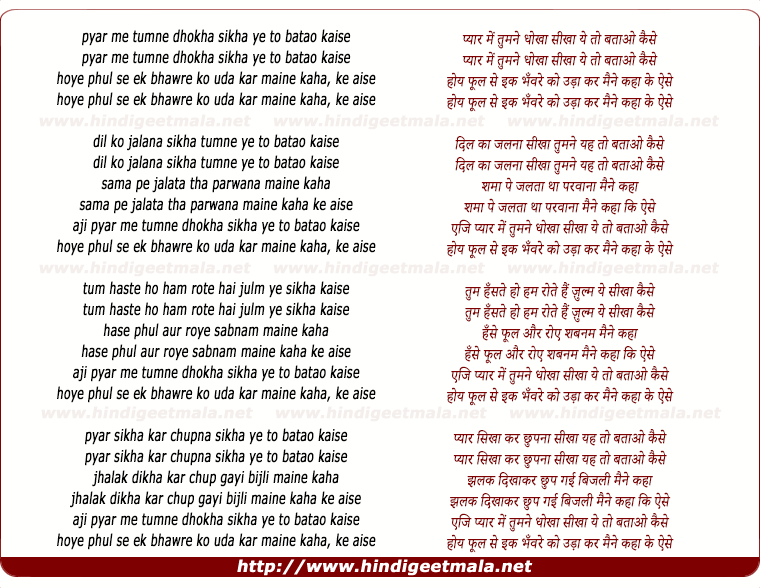 Comments on song "Pyar Me Tumne Dhokha Sikha Ye To Batao Kaise"
rafisolanki on Friday, October 07, 2011
Shabnam is the word of the Iranian language,farsi, its meaning is the dew drops,that fall on the flowers well before the dawn,i.e. in the early morning.Shabnam word is used for pure, sacred, transparent, etc. Farsi or persian language is the mother of Urdoo language, and it is said that human beings emotions, feelings,lyrics can forcefully and effectively be expressed in Arabic, farsi and Urdoo. (07.10.2011)
Bajaury on Monday, January 21, 2013
Shabnam is both Pushtu and Farsi but I dis agree with you that Farsi is the
mother language of Urdu. Hindi is the mother language of Urdu. Take any
urdu sentence, almost 95% or more is Hindi and the rest could be farsi,
Arabic or Turkish. With you other commnets I agree.

Bajaury on Monday, November 12, 2012
Wrong. Farsi is NOT the mother language of Urdu. Hindi is the mother
language of Urdu. More than 80% of Urdu is Hindi. Most Hindi speaking
people understands Urdu quite easily, but farsiwan have no clue about Urdu.

muhammad niazi on Monday, December 29, 2014
No, not at all. Shab mean night in urdu and persian and nam means moisture.
So, it is night moisture and in English it is called 'dew'. ﻿

Partha Chanda on Wednesday, December 12, 2012
Actually , the word "shabnam" is a combination of two separate urdu words ,
namely "shab" meaning morning and "nam" ( akin to "nami" in hindi) meaning
precipitation , to be interpreted as dew .