Video of this song from youtube
Average Rating : 4.19
Total Vote(s) : 81
Please rate this song between 1 star and 5 stars (5 stars being the best). Just move your mouse on the stars above and click as per your rating. Your rating will really help us to improve our website. 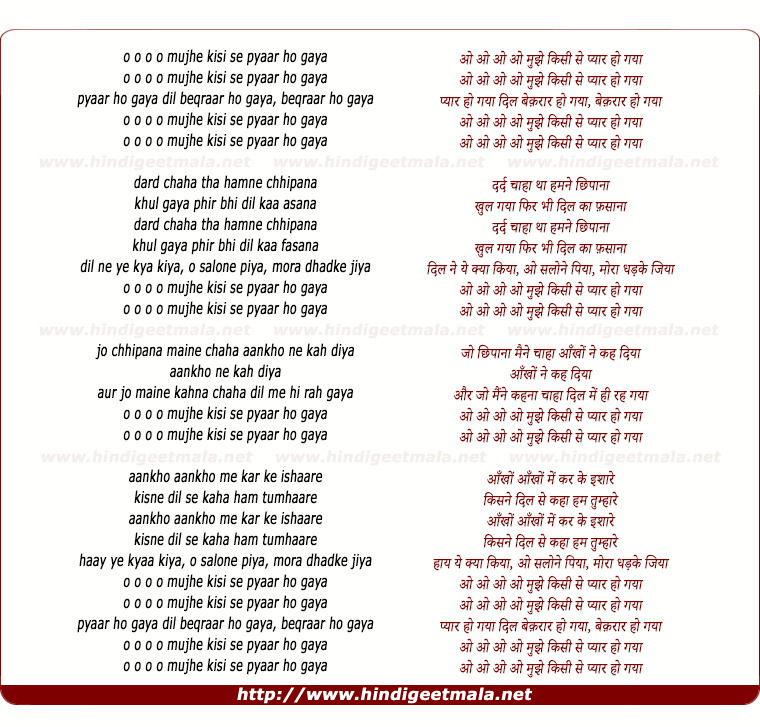 Comments on song "O O O O Mujhe Kisi Se Pyaar Ho Gayaa"
TUFAIL HEERA on Thursday, January 29, 2015
I FALL IN LOVE WITH SOME BODY (Very Nice Song) !!! Thanks a lot for keeping
the memory alive. Please note that right from my old days I had always
taken these types of songs to my heart. The moving of both the wordings
and tuneful work of art to a different levels is great proof with the soul
performance by Madam Lata Ji. Let us also try to detain the dignity and
try to bring out the human values through such a Beautiful Film and its
songs. Thank you so much for excellent and marvelous upload.﻿

reverseswing on Thursday, February 23, 2012
No other Music Director gave such super hit songs in his debut film as
Shanker-Jaikishan in film BARSAT. S&J used Lata's voice in all but one song
in this film.

skylark304 on Monday, January 23, 2012
THE QUALITY OF ACTING TO EMOTE EMOTIONS ON THE SILVER SCREEN WAS SO UNIQUE
BETWEEN RAJ & NARGIS THAT AN AUDIENCE IS MESMERIZED AT THE FLUDITY OF
NATURAL SEQUIENCE THAT PREVADED IN HIS/HER OWN PERCEPTION. IT'S O MAGIC !