Video of this song from youtube
Average Rating : 4.86
Total Vote(s) : 7
Please rate this song between 1 star and 5 stars (5 stars being the best). Just move your mouse on the stars above and click as per your rating. Your rating will really help us to improve our website. 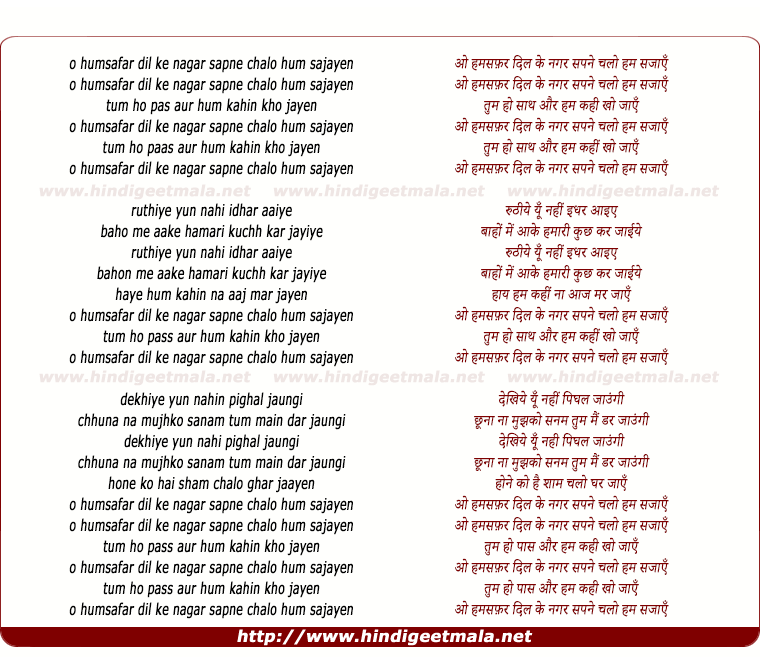 Comments on song "O Humsafar Dil Ke Nagar"
closetofcoach on Tuesday, February 26, 2008
u know something weird every movie that mahesh bhatt makes he launches a
new guy and girl. strangely though while their debut film is a hit they
never make it to the top, case in point..aashiqui, fareb ...

nallie1st on Wednesday, February 20, 2008
i realli like this song i can play it over and over, i saw the movie it is
a really nice movie, thank's for uploading.. love it..

Sharad Tiwari on Thursday, October 25, 2012
This song came around 1996 and the whole year round this song would be
heard from all corners. I had just entered an engineering college and was
going through the ragging period :) and this song was like a breeze of
fresh air when we heard it being played from our senior's rooms.

Nawa Nawa on Monday, July 20, 2015
I was 14 when this song came out in 1996...our neighbour used to play this
song so loud that whole surrounding used to shake ...unfortunately for the
song, visualisation is not good and male actor is very unattractive...﻿