Video of this song from youtube
Average Rating : 4.46
Total Vote(s) : 990
Please rate this song between 1 star and 5 stars (5 stars being the best). Just move your mouse on the stars above and click as per your rating. Your rating will really help us to improve our website. 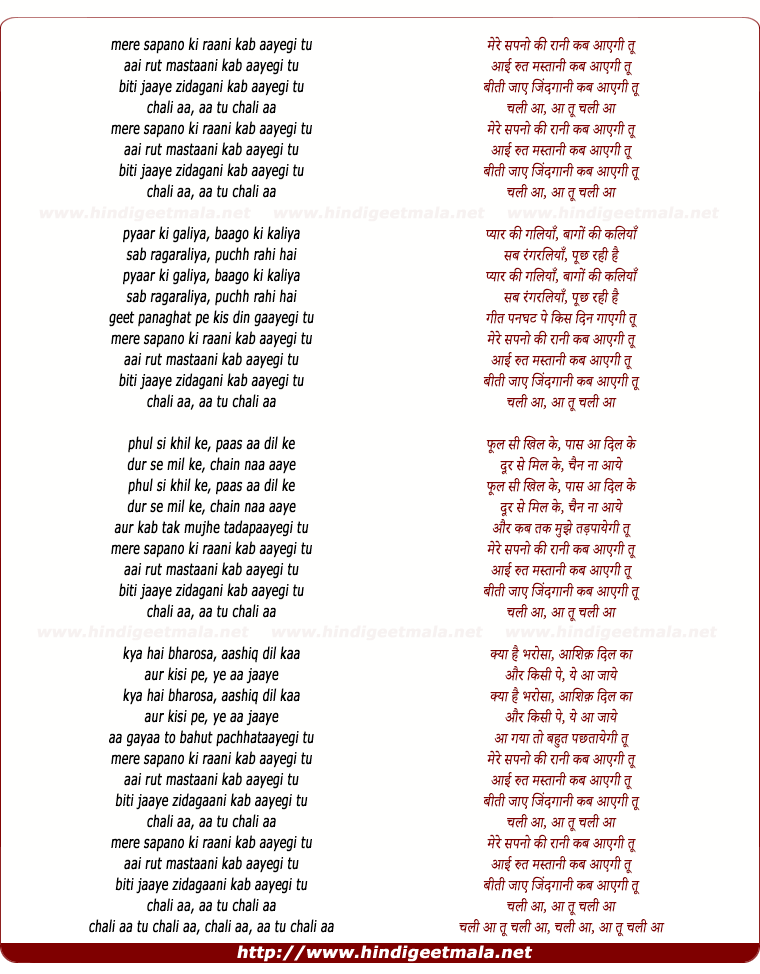 Comments on song "Mere Sapno Ki Raani, Kab Aayegi Tu"
KANDASAMY T S on Monday, August 04, 2014
Aradhana (Worship) is a 1969 Bollywood film directed by Shakti Samanta and
starring Sharmila Tagore and Rajesh Khanna.
It is a remake of the Hollywood film To Each His Own, a 1946 movie.
It was voted best film of the year by the Filmfare Awards. Sharmila Tagore
won her first Filmfare Best Actress Award for the same role that won Olivia
de Havilland her first Academy Award for Best Actress.

Lahoreumar on Wednesday, June 01, 2011
The majestically jaunty and boisterously exuberant acting of Rajesh Khanna
has made this a legend of a song.This song made Kishore Kumar the﻿ king of
playback singers and Rajesh shot to the heights of stardom.The direction of
Shakti Samantha speaks for itself. The train journey to Darjeeling running
almost parallel with the winding road was an excellent shooting
location.This hearty song has the bewitching effect to amazingly lift the
soul of a tired,﻿ weary and low spirited person to heights.

hobgoblin707 on Friday, November 14, 2008
cont'd: my ideal romantic: "main kahin kavi na banjao". it is more full and complete with the variety of emotions: teasing fun, tongue and cheek humor, devotion, love! everything that romance is about. in comparison, "mere sapano ki rani" is too unvaried and monotonous with only one emotion that captures just "part" of romance. hey - this is all my opinion. it only matters to me. whatever makes you happy! nevertheless, regardless of how you feel, it was fun hearing your opinion and exchanging.
Naaz Jiwa on Monday, July 23, 2012
He was. Also the only child of his parents - his mother refused to watch
Safar and Anand due to death scenes at the end of the movie (s). As for
Amitabh, the guy has no class. He is petty, a crook (declared bankruptcy
only to continue enjohying life), and NOT a nice man. RIP Jatin (Rajesh)
Khanna. Very sorry to see you go, you were my HEARTTHROB - as a student in
India, travelled to Bombay just to se his home Aashirwaad. No money to buy
food but I had to do this - who does that now? Sad


hobgoblin707 on Sunday, November 30, 2008
i don't wanna talk too much rafi seeing this is a kishore video but one last reply to your tsunami remark. kishore's success in aradhana only helped him it did not hurt anyone. this is something that is often grossly misinterpreted imo. to cut a long post short, take out rafi from the 70s and the industry would be standing on only one leg that being kishore. just as rafi could not replace kishore in the 70s, kishore could not replace rafi in the 70s. such is the impact of these greats!
View all 1077 comments related to song Mere Sapno Ki Raani, Kab Aayegi Tu
Popular Links on HindiGeetMala