Video of this song from youtube
Average Rating : 4.52
Total Vote(s) : 91
Please rate this song between 1 star and 5 stars (5 stars being the best). Just move your mouse on the stars above and click as per your rating. Your rating will really help us to improve our website. 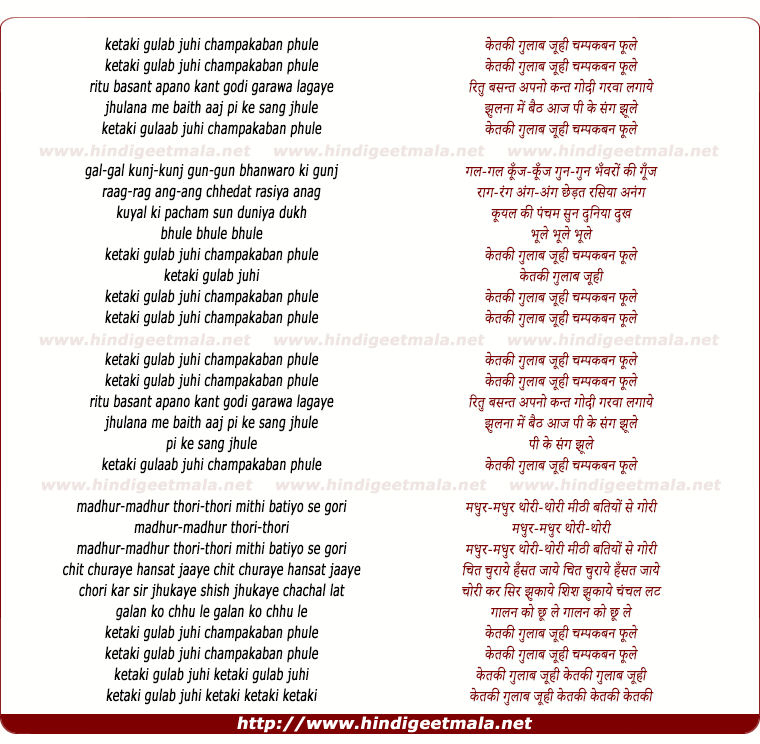 Comments on song "Ketaki Gulaab Juhi Champakaban Phule"
r8rdarklord on Wednesday, November 28, 2012
Pt Bhimsen is Bharat Ratna, so it's unfair to compare him with the judges
on Indian Idol. I do agree because some of those guys act as if they are
the greatest gift to mankind. BTW, give a listen to this years saregamapa,
specially Mohd Aman - I don't know who he has learned from but some of his
taans are like Ustad Salamat Ali Khan; he sings pure classical and most of
the bandishes are from Agra Gharana. Not sure how long he is there but
might as well savor his singing while it lasts.

Samprasad Majumdar on Wednesday, October 23, 2013
An anecdote of the narration of the great maestro Manna Dey is in order:
the maestro was chided by his beloved wife for seeking to hide away on a
holiday, as the prospect was imminent that he would have to match with
Pandit Bhimsen Joshi on this very song. But, Pandit Joshi was his greatest
help, however, for this song, like a guru, I believe. Now, aside, the story
line is my predicament: a disciple does not defeat his guru in public;
rather glorifies his art.

ratantata1 on Monday, September 21, 2009
After several years Manna Dey also accepted one thing.when Padosan was released, Manna Dey was asked to sing aginst Kishore Kumar and was defeated by Kishore...Manna Dey argued "these Directors, Producers and sometimes Music directors also don't understand...they made him lose aginst Kishore Kumar and win against Pt Bhimsen Joshi"...that is so funny...
SABINA S on Tuesday, October 26, 2010
@dams0001 Actually Bhimsen Joshi is down playing is capabilities. He is a
great singer, and Manna Dey, as good as he is, is no where near Bhim ji. I
heard Bhimsen Joshi's live concert, and they are amazing. He has a
beautiful voice and singing abilities. Personally I love his voice above
any artist.