Video of this song from youtube
Average Rating : 4.57
Total Vote(s) : 68
Please rate this song between 1 star and 5 stars (5 stars being the best). Just move your mouse on the stars above and click as per your rating. Your rating will really help us to improve our website. 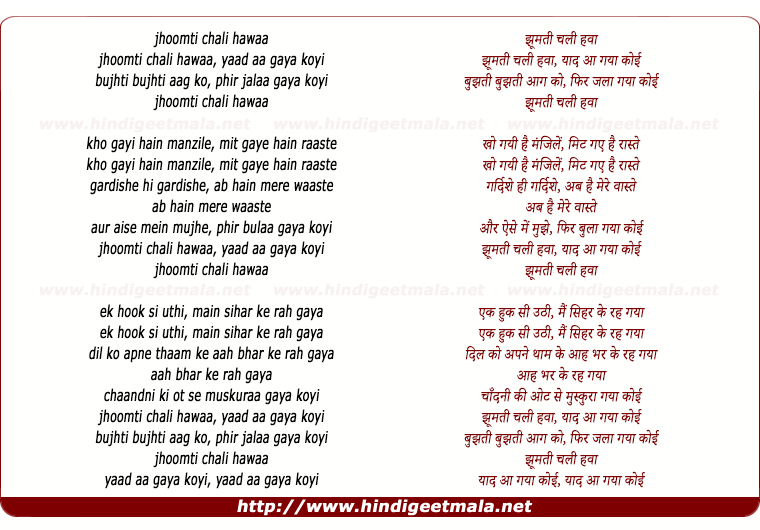 Comments on song "Jhoomti Chali Hawa Yaad Aa Gaya Koi"
rumahale on Saturday, July 10, 2010
@crazyoldsongs Thanks. You are right - i. it is precious. ii. second stanza
differs in audio and video. I might have noticed while posting lyrics but
have really forgotten. The lyrics has 3 stanzas - first 2 as in audio and
the 3rd is second stanza as found in video (ek hook si uthi..). The song is
unforgettable for its classical music and excellent rendition by Music.
Knowledgeable comment from you has enhanced richness of posting. It is also
encouraging for me. Once again thanks for liking.

rumahale on Monday, January 21, 2013
There is some news in continuation of our discussion - it can be held as
authentic as well. One of my friends who had uploaded the audio has since
clarified that audio and video had two different stanzas (one in common).
This is in accordance with my guess. Please view his (NIKHIL Iyer) post
captioned - " Jhoomti Chali Hawa (Sangeet Samrat Tansen-1962) Mukesh- Full
song ".

rumahale on Monday, August 26, 2013
Great memories indeed. Thank you Sir for liking and rich appreciation. As
regards other stanza mentioned by me, much discussion has taken place in
the comments on this page. It is now concluded that the stanza was present
in the audio only; and, the second stanza in the video is different - only
first stanza is common in video and audio.

rumahale on Thursday, January 17, 2013
This was discussed two years ago itself; please see the comments from
"crazyoldsongs" and my reply on this page. I have heard the audio again; it
has only two stanzas, and, the second stanza in audio and video differ! I
have not seen the movie. I am also trying to explore the same video on
others' channels. Thank you.

Mani Menon on Friday, January 18, 2013
Any discussion of Tansen will automatically veer towards the two well known
movies made. The earlier one starring the late great K L Saigal and the
later version starring Bharat Bhushan. The 'Saigal generation' will wax
eloquent about Saigal's songs while 'my generation' will gravitate towards
the later version! But, like Switzerland, I have maintained a neutral
stance. Given that during the 'Saigal days', songs were recorded on the
spot as the actor acted and sang the songs, it was incredible!