Video of this song from youtube
Average Rating : 4.11
Total Vote(s) : 44
Please rate this song between 1 star and 5 stars (5 stars being the best). Just move your mouse on the stars above and click as per your rating. Your rating will really help us to improve our website. 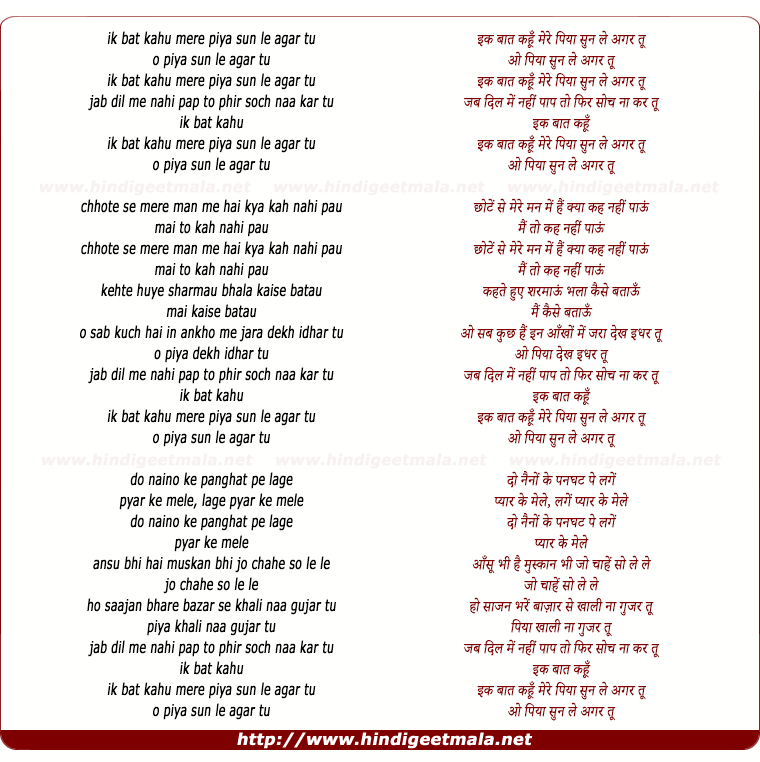 Comments on song "Ik Bat Kahu Mere Piya Sun Le"
Kay Cee on Monday, October 18, 2010
An exemplary display of Indian folk dancing and singing! Also a proof why
Dilip and Madhu had all those millions swooning over them... A treat to
watch ..

asha1053 on Friday, December 23, 2011
lovely song and performance by the dancer...thanks to Indian Cinema!!
V. Siddhartha on Thursday, September 30, 2010
One of the finest folk dances and songs of Indian cinema ever, in the same
league as Zulmi Sang Aankh Ladi in Maduhmati. Glory be to Naushad Ali, Asha
Bhonsle, Nimmi, Dilip Kumar, Madhubala ,and the dancers; the whole scene is
magical. Thank you for the upload.

Mukhtar Zaidi on Sunday, June 08, 2014
Just listen the voice of AASHA BHOSLY,and Her voice today,the difference of
age is there,but Quality of voice still the same.She will not be over 16
Years age,when sung this song.Great Singer of All time Sub continent Music.
﻿

LEONI GIOVANNI on Friday, January 18, 2013
Alas the goddess died long time a go, also she took your Nimmi the angle
with her, and now it is your time to meet with the only GOD in have who
never die.