Average Rating : 4.73
Total Vote(s) : 15
Please rate this song between 1 star and 5 stars (5 stars being the best). Just move your mouse on the stars above and click as per your rating. Your rating will really help us to improve our website. 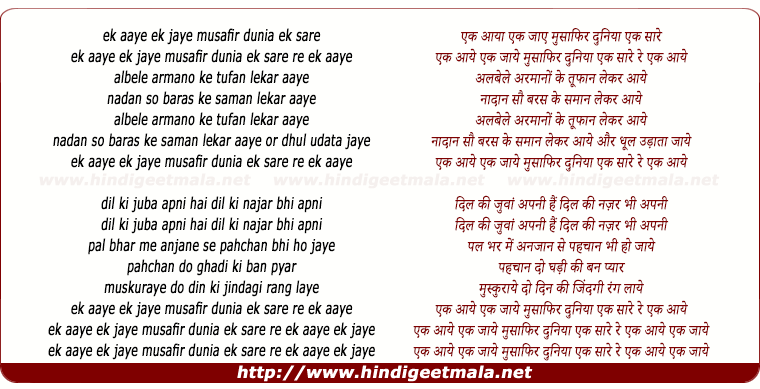 nandu1f on Saturday, August 08, 2015
I have vague memories of watching this movie at a matinee show. There is
Dilip Kumar part also. But What I remembered was this beautiful song
picturised on Mohan Chotti. Indeed human dramas are such, they all need a
physical anchor, while "actors" differ, Not to underplay the strength of
emotions, which are are unically real for the people involved. Thanks cos
ji for your invalkuable service in capturing these videos for our pleasure.﻿

crazyoldsongs on Thursday, February 23, 2012
@derubala thank you dee . at the first instant it seems like manna dey .
and then a mixture of hemant da and manna dey ! the beautiful rare bhajan
by lata ji is already uploaded .

Dee Thakore on Wednesday, February 22, 2012
The singer is Syamal Mitra. In this movie there is a nice bhajan by lataji
man re hari gun gaa which is rarely heard and was filmed on Suchitra Sen.