Video of this song from youtube
Average Rating : 4.75
Total Vote(s) : 24
Please rate this song between 1 star and 5 stars (5 stars being the best). Just move your mouse on the stars above and click as per your rating. Your rating will really help us to improve our website. 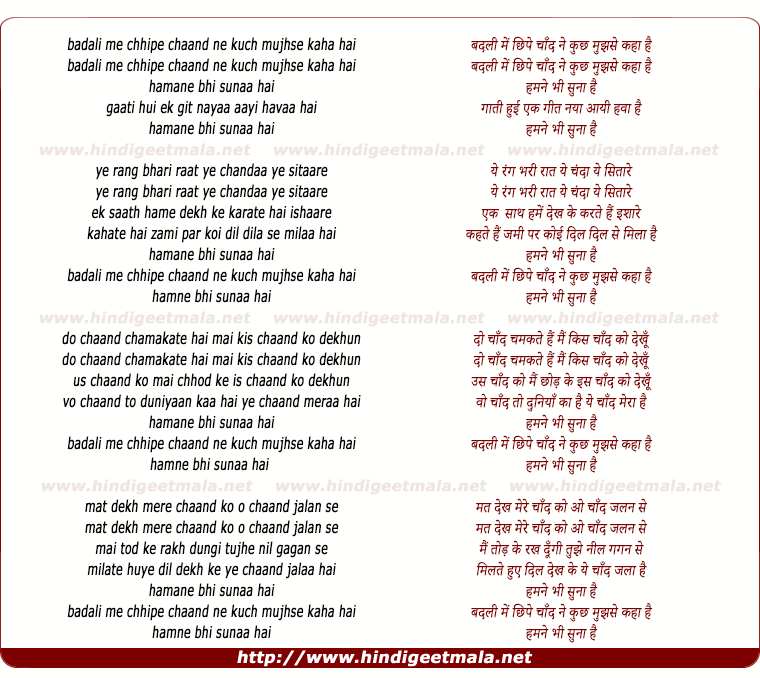 Comments on song "Badali Me Chhipe Chand Ne Kuch Mujhse Kaha Hai"
ravi7550 on Saturday, March 14, 2015
The song i simply enchanting.The voice of Lata & Hemant Kumar is just
outstanding & so is the music of C.Ramchandra.I agree with Shaukat Jamil
that the melody & sweetness of Latas' voice has been best under
C.Ramchandra.I would however,also add Hemant Kumar.
Ravi Sinha﻿

V. Siddhartha on Sunday, April 26, 2009
There is a special sweetness in all Lata-Hemant Kumar romantic duets. The
mellowness needed in such melodies always comes more from HK than from
Lataji, though of course Lataji always retains her scintillating quality.
Thanks, Ajitji.

Shaukat Jamil on Tuesday, December 18, 2012
Lataji once said her voice was best used by C.R and Citragupta. I can not
say much about Chitragupta but every singer has given his/ her best under
C.R.A few examples.Rafi is most melodious in Insaaniyat in Apni chhaya mein
bhagwan The only other time I found him equally melodius on treble was in
Kangan Aandhian ghum ki chalti hein under Chitragupt.Under C.R in Lutera
Veeran mera dil hai he even dominates Lata ji. Tilat the melody king sings
lower than lata in Parchain Dil dil se.So C.R is great

VeeJay on Friday, June 04, 2010
These two are at their best in compositions of Hemant Kumar or C. Ram
Chandra. Or, I am biased.