Video of this song from youtube
Average Rating : 4.57
Total Vote(s) : 30
Please rate this song between 1 star and 5 stars (5 stars being the best). Just move your mouse on the stars above and click as per your rating. Your rating will really help us to improve our website. 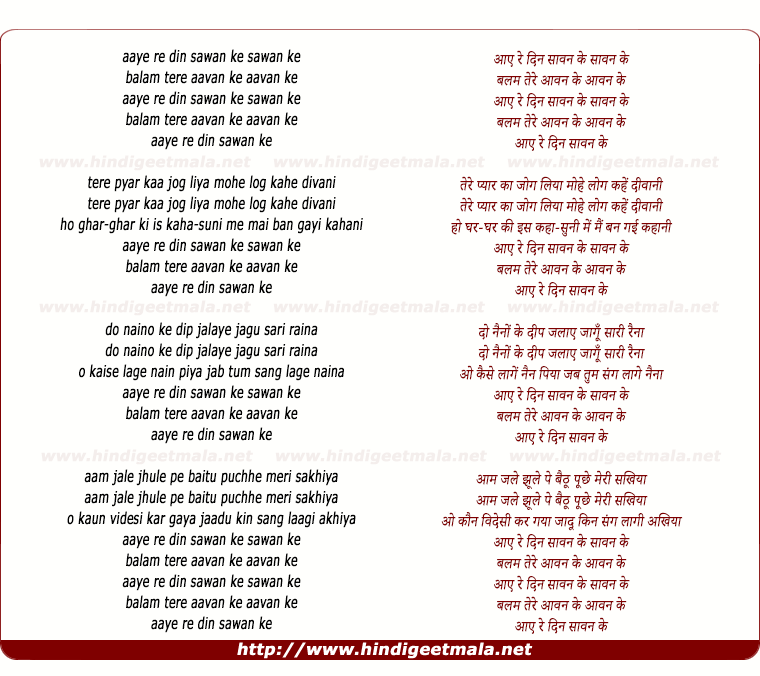 Comments on song "Aaye Re Din Sawan Ke Sawan Ke"
V. Siddhartha on Saturday, January 10, 2009
A sweet song with the alluring, innocence-filled beauty of Sadhana added!
To some of us surrounded by the modern urban rat-race, such scenes,
redolent of the somewhat idealized purity and carefree, simple joys of
Indian rural life, are special to behold. We cherish them even when knowing
well that such joys are rare and fleeting in the average small farmer's
normal life,which is filled more often with deprivation and suffering.
Thanks,Suhanee.

Rmehtacpa on Monday, July 05, 2010
While this is one of the top tunes of SJ fitting well to the village scene
and sadhna's innocent sheer beauty, whoever played the dholak in here, got
to be the CHAMPION OF CHAMPION dholak players. As for SJ listen to the too
well recorded echos of latas voice starting at 1:45 to 1:56 that only
enhences the village scene backgroud.

V. Siddhartha on Saturday, September 18, 2010
Your" conspiracy" to keep me glued to the computer is fully successful
again, Ajay. The SJ-Lata combination always makes me drop everything else.
In this particular case, the sweet images of Sadhana that I recall only
elevate the joyfulness. In the film she acts as a lovely rural belle
frolicking innocently in her village with playmates-- on the swings, in the
streets and amid haystacks. Thank you

Rmehtacpa on Monday, July 05, 2010
Soo, so pretty was this girl till she unfortunatelly encountered the eye
problem.