Video of this song from youtube
Average Rating : 4.50
Total Vote(s) : 32
Please rate this song between 1 star and 5 stars (5 stars being the best). Just move your mouse on the stars above and click as per your rating. Your rating will really help us to improve our website. 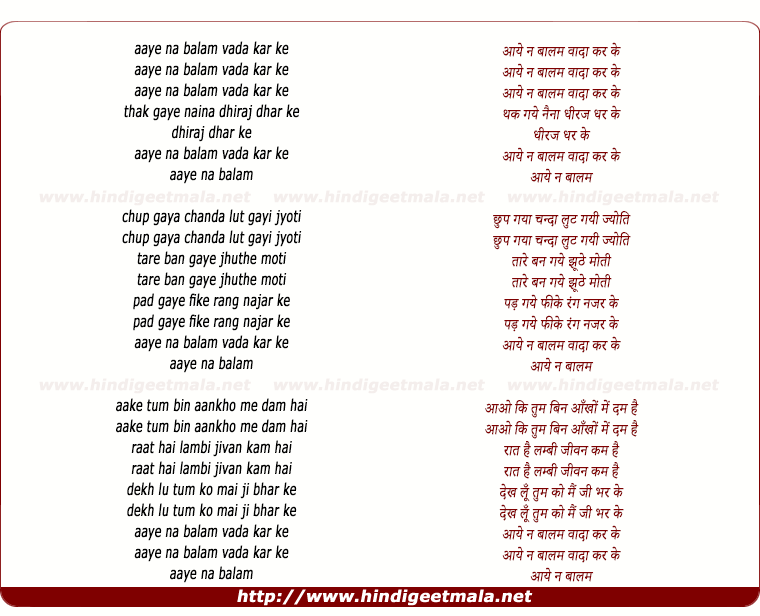 Comments on song "Aaye Na Balam"
sureshshah3 on Monday, December 05, 2011
Thsis song(Thumri Type) has been composed by Padma Bhusan Naushadji in Desh
Raag (Mix) and sung by Rafi Saab in his Soothing Voice.Miss U Both Rafi
Saab & Naushadji.God Bless U both.In fact slow rythem(Lay) gives more
soothing touch in Saab's Voice and has rightly been used by GR8 Naushadji

Mercy Daven on Monday, July 13, 2015
From the very beginning to the very end and of course throughout the
middle, Rafi dazzles us with his hallmark unique manipulation of voice. The
emotion his voice conveys is incomparable.﻿

shooaibee123 on Monday, March 15, 2010
simple beuty.you can say as much you wanna say, but can not be enough...That is Rafi Saahab.
Suresh Khemani on Friday, August 26, 2011
Beautiful composition, lyrics and above all greatest singer to sing this
song.