Video of this song from youtube
Average Rating : 4.60
Total Vote(s) : 15
Please rate this song between 1 star and 5 stars (5 stars being the best). Just move your mouse on the stars above and click as per your rating. Your rating will really help us to improve our website. 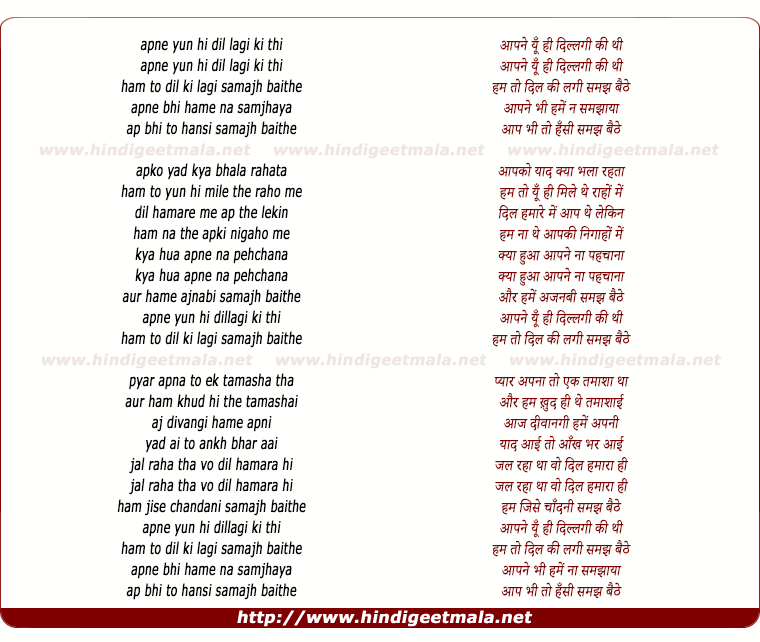 Comments on song "Aapane Yun Hi Dillagi Ki Thi"
Zil Hasnain Kazmi on Saturday, January 08, 2011
Mekesh ji was an outstanding singer. He was one its kind. His voice was God
gifted and with full of pain. You got to be very brave from in side to
endure his broken heart expressions. (8th Jan 2011)

aceji on Saturday, December 20, 2008
A fantastic Mukesh-KA creation. There is another one from the same
film---Teri woh chaal hey ke tauba. Please upload that one as well.Thanks.

erwinpultoo on Wednesday, January 05, 2011
Mukesh, the heart of millions as we used to say in Suriname (S.A )
Beautiful heavenly voice in a golden mood.
Brokenhart songs were his style.