Video of this song from youtube
Average Rating : 4.56
Total Vote(s) : 9
Please rate this song between 1 star and 5 stars (5 stars being the best). Just move your mouse on the stars above and click as per your rating. Your rating will really help us to improve our website. 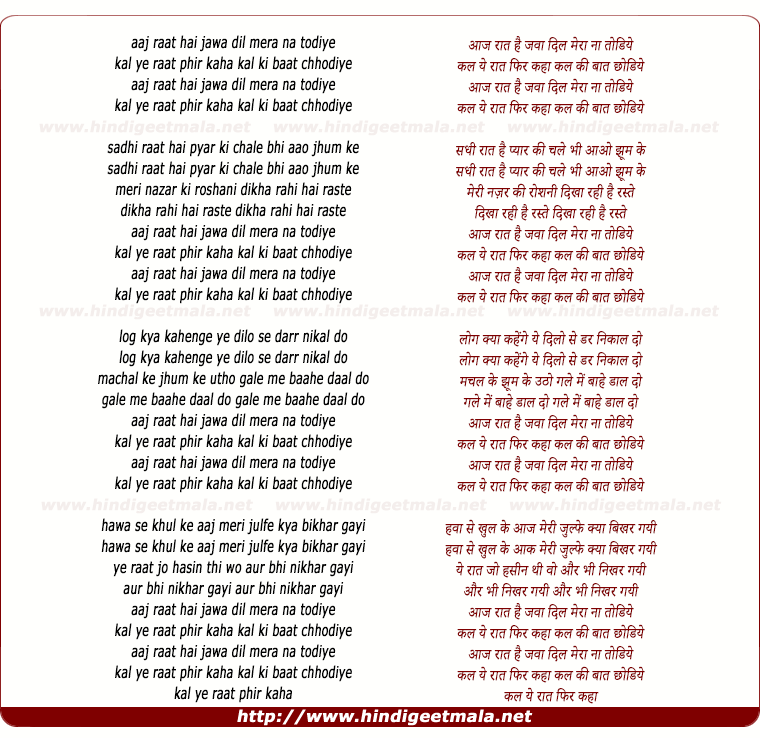 Comments on song "Aaj Raat Hai Jawan, Dil Mera Na Todiye"
chandrashekharjain on Wednesday, August 18, 2010
@bobbyBollyfan =Difference being that Zeenat entered the scene with a BANG
whie Mumtaz entered Hindi Cinema at the age of twelve as an extra in early
1960s, thereafter accepted small roles in big films and big roles in small
budgeted stunt films. In the 1960s she was labelled as a stunt film
heroine. She first gained attention in a supporting role as a vamp in the A
grade color hit film Mere Sanam (1965) , not looking back went on to become
a TOP RANKED HEROIN A typical case of NADIR TO ZENITH

bobbyBollyfan on Thursday, June 03, 2010
My dear friend, this is superb; Asha does a sublime job here;
Shankar-Jakishan never fail to inspire in characteristic fashion. Presence
aplenty is exhibited by dashing Sunil Dutt and scheming & sinister Pran and
particularly Shetty; Finally, the alluringly beautiful Mumtaz could be
risqué, but showcase refined femininity to perfection; I firmly believe
that she was to the 60's what Zeenat was to the 70's. Thank you kindly my
friend, as always :-)

jasbongy on Thursday, June 03, 2010
The way Asha ji sings this song with so much ease and joy, i salute her for
her versatillity to sing different types of songs . Mumtaz 's beautiful
face with that glow indicates her brilliant mind to act any type of roles
with ease. Thanks Jemal ji for always uploading beautiful,unique videos
with interesting Info. Thumbs Up. Love. Sis. Sarla.

bobbyBollyfan on Thursday, August 19, 2010
@chandrashekharjain Greetings :) Great reply. I have no doubt you are
correct; as heroines & sirens they were as wonderful as stars came. I
adored them both & thought them pioneers par excellence. However, I can
appreciate that, Zeenat hit ala a maelstrom, whereas much like her screen
persona, Mumtaz was like sunshine after the rain. It has been a pleasure
sharing thoughts. Thank you.

syrian71 on Thursday, June 03, 2010
Mumtaz role in this film is a supporting actress but she stole all the scenes from Asha Parekh and and all the audiences attention is went to Mumtaz ! She is amazing.
View all 15 comments related to song Aaj Raat Hai Jawan, Dil Mera Na Todiye
Popular Links on HindiGeetMala