Video of this song from youtube
Average Rating : 4.60
Total Vote(s) : 5
Please rate this song between 1 star and 5 stars (5 stars being the best). Just move your mouse on the stars above and click as per your rating. Your rating will really help us to improve our website. 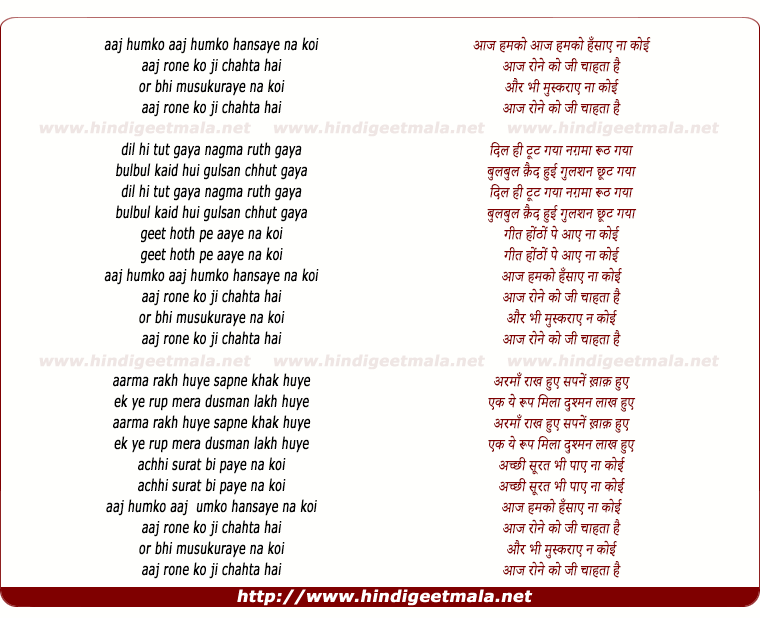 Comments on song "Aaj Humko Hansaye Na Koi"
Hatshepsut on Sunday, July 31, 2011
I seemed to have seen this video clip in color on youtube. Maybe I dreamt
it. But there is another song from the same movie here and it is in color.
Maybe someone can verify/clarify this? I love the song. Thanks.

Hatshepsut on Wednesday, August 03, 2011
@Nostalgicc565 Thanks for the response. But I have seen this very song in
color just last year here, Sometimes the license/copyright claiming
fraudsters are on the prowl and the clips are pulled.:(

kuckudk on Sunday, June 19, 2011
Wah Wah Dharmesh I am listening to this old song after a very very long
time.Thank you for sharing it .

Basheer Ahmed Khan Azeemi-Nostalgicc on Wednesday, August 03, 2011
@reva12 well , i have two prints of the movie and both are partially in
color ... let me check it again ... Thanks for watching ...